Many masterpieces of the 1990s are etched in our memory. So compiling a list of the best movies is not an easy task. However, 10 feature films stand out, all genres combined, according to various sites that list viewer ratings.

This “ranking” therefore does not reflect the general opinion of the editorial staff and some of your favorites may not be included. But he gives the opportunity to (again) have a good time watching cult films that have marked a generation.

“Schindler’s List”, directed by the great filmmaker Steven Spielberg, is inspired by the true story of Oskar Schindler, a German industrialist and member of the Nazi Party, who during World War II allowed a thousand Jews to escape death. In 1994, during the Oscar ceremony, the film was awarded in 7 categories, including best film, best director and best adaptation. It has also received 7 BAFTA awards and 3 Golden Globes. The cast includes Liam Neeson, Ben Kingsley and Ralph Fiennes.

Adapted from a novel by Stephen King, “The Escaped”, Frank Darabont’s first film as a director, narrates the birth of a friendship between two prisoners. Young banker Andy Dufresne (Tim Robbins) is sentenced to life in prison for the murder of his wife and his mistress. While incarcerated in Shawshank, the most severe penitentiary in the state of Maine, Andy, who proclaims his innocence, meets Red (Morgan Freeman), an inmate who has been serving his sentence for twenty years. This is the beginning of a great friendship story.

Two small murderers, a dangerous gangster, a cunning boxer, sadistic moneylenders, an elegant capo, a good husband dealer… “Pulp Fiction” (1994), the second film by Quentin Tarantino, for which he received a Palme d’Or in the cannes film festival, describes the bloody odyssey of the thugs in the Hollywood jungle, where several destinies intersect. Awarded for its screenplay at the Golden Globes and the Oscars in 1995, the feature film stars John Travolta, Samuel L. Jackson and Uma Thurman.

“MATRIX” BY LANA AND LILLY WACHOWSKI

When it was released in 1999, the first installment of the saga Matrix, directed by the Wachowski sisters, was a resounding success. Viewers first meet Thomas Anderson (Keanu Reeves), a programmer in an administrative department during the day who becomes Neo at night, and the hacker Trinity, played by Carrie-Anne Moss. Straddling two worlds, Neo is plagued by encrypted messages from a certain Morpheus. This urges him to go beyond appearances and find out what the Matrix is.

“Life is like a box of chocolates, you never know what you’re going to get.” A landmark film in film history, Robert Zemeckis’ “Forest Gump” with Tom Hanks follows the turbulent journey of a disabled boy from Alabama. He will accomplish great things by participating most of the time without realizing it in events that marked the history of the United States, between the 1950s and 1980s. The film grossed $678 million worldwide and received six Oscarincluding Best Picture.

Adapted from Chuck Palahniuk’s novel of the same name, “Fight Club,” directed by David Fincher, portrays a lonely thirtysomething with no illusions about life. To give meaning to his existence, he will found, with the help of the charismatic Tyler Durden, played by Brad Pitt, the fight club. In this clandestine place, violent fights are organized whose objective is to allow the members to evacuate their discomfort. Edward Norton and Helena Bonham Carter also star in this film which, when it was released in 1999, had experienced a semi-commercial failure.

In “Seven” (1995), David Fincher’s second film, Inspector Somerset, who is about to retire, makes one last investigation. An unusual criminal calling himself John Doe has set out to cleanse society of his evils by killing seven people. The murders are based on the seven deadly sins, namely gluttony, greed, sloth, pride, lust, envy, and anger. The cast is made up, in particular, of Brad Pitt, Morgan Freeman and Gwyneth Paltrow.

In 1990, the legendary director Martin Scorsese signed “Freedmen”, a gangster film inspired by a true story. In the 1950s, young Henry Hill, who wants more than anything to become a gangster, will make his dream come true. After a stint in prison for petty crimes, he meets two mobsters, James Conway and Tommy DeVito, and participates in a warehouse raid at Idlewild Airport. This five-time BAFTA award-winning film stars Ray Liotta, Robert De Niro and Joe Pesci.

“THE GREEN LINE”, BY FRANK DARABONT

Directed by Frank Darabont, “The Green Line” (1999) tells the story of Paul Edgecomb, played by Tom Hanks, a head guard at Cold Mountain Prison. In charge of ensuring the proper development of capital executions, he will establish very strong ties with one of the condemned, the colossus John Coffey (Michael Clarke Duncan), a man endowed with supernatural powers and accused of the rape and murder of two girls. . Adapted from Stephen King’s book, the film is an indictment of racism and the death penalty.

THE USUAL SUSPECTS BY BRYAN SINGER

Released in 1995, Bryan Singer’s devious thriller “The Usual Suspects” became legendary thanks to its brilliant screenplay, written by Christopher McQuarrie, who also received the Oscar for Best Screenplay, but above all its famous twist ending, which has been become one of the most prominent. most famous of cinema. With a relatively low budget of $6 million, this multi-hoax crime novel, starring Chazz Palminteri, Gabriel Byrne and Kevin Spacey, grossed more than $51 million worldwide. 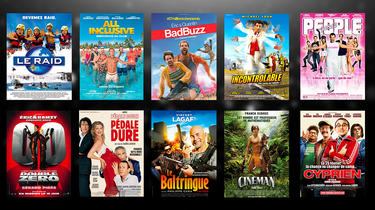 In “Jurassic Park” (1993), Steven Spielberg revives species that disappeared 65 million years ago. The young billionaire, John Hammond, launches himself into the cloning of dinosaurs, starting from a drop of blood found in a mosquito. With the help of Dr. Alan Grant and his friend Ellie, he decides to unite the species into one great theme park. But nothing goes according to plan and the animals end up escaping, to the misfortune of the visitors.